So when last I wrote, I was planning an assault on the Wild Wood, in an effort to clear enough space for the fence to be replaced. However, I'd forgotten that I'd also resolved to keep on top of the climbing plants this year, until I noticed that the clematis was already sending out new shoots. (Something which struck pure terror in my heart after having to wrestle with it last year.) The wood was postponed while I cut back and tied up my various climbers. Most of the last two weeks has been about restraining a honeysuckle that loves our pergola a little too much, but that's another blog...

Flowers are coming out with a vengeance. My focus is on the back garden, but there's no denying that this raised bed around the front looks fantastic this time of year, with its golden flowers matched by the forsythia blossom behind it. 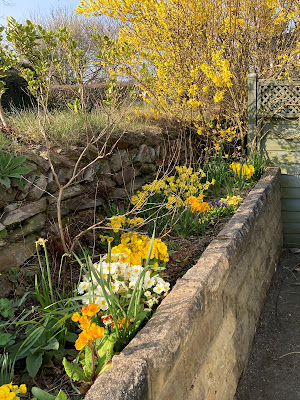 And in the back garden... a mystery flower! I'm baffled by this solitary purple-speckled bud that's arisen amidst the three-corner-garlic. I don't remember anything else growing there last year. I've not tried offering it blood yet (it's not like it's in the Emo Grove); we're just watching what happens.... 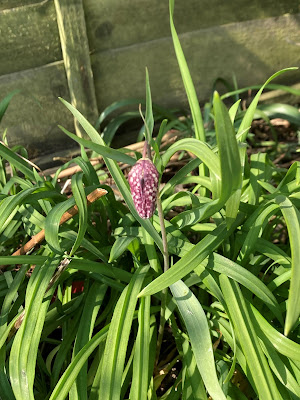 At any rate, it's too early in the season to prune back trees: they may bleed sap. I don't know exactly why that's a problem, but it sounds gory; I had decided the prudent course was to infiltrate the Wild Wood towards the end of spring.

Then the fence contractor came round for an inspection and I learned two things: Firstly, I will need to clear as much space as I'm willing around the fence; secondly, that he could get it done in the Easter Holidays, which means I have two weeks to conquer the Wood.

Obviously, I could have requested a later date, but if it wasn't April, we'd be looking at late summer. On balance, it's probably easier on the plant-life to be cut back now, then have the summer to recover. Not to mention I work better with a deadline.

I scouted around the fringes, lightly pruning back stray branches as I tried to assess exactly what awaited me in the depths. I still can't figure out all the trees, but I did establish that I have three different camellias. 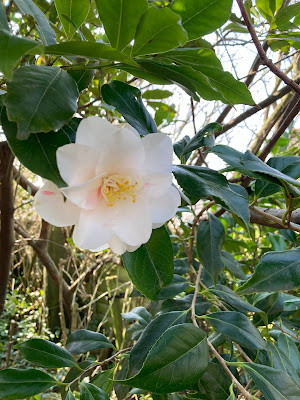 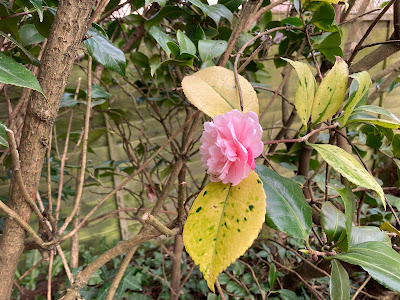 This frilly pink one. Most of the leaves are green, but a few are yellow. I assume that's a sign of poor health, but I figure if it's flowering, it can't be too bad. I'm still getting to grips with pruning... balancing soil nutrients will have to wait until next year.

And finally, the one that is not photographing well. The third camellia has no (visible) blooms yet, and fewer buds. It's smaller than the other two and not pushing back against the surrounding trees. I'm hoping it will flourish if I can give it more space. (In the mean time, the other two provided me with a Mothering Sunday bouquet for my Mum!)

I had always believed that the Bay Tree was the dominant figure in the Wild Wood. Don't envision a rotund ornamental in a pot. Ours is several meters high, a general on the front lines who stands tall at the intersection of the path, the Wild Wood and the Briars. With a holly as its vigorous second, the Bay Tree holds back the Briar's attacks. One by one, their soldiers hurl themselves at it, trying to spear a path through to the Wood, but with the bay leaves starving them of sunlight, they twist around and seek refuge on their own side again.

However, as I stood next to the Bay Tree and traced the paths of the branches through the canopy, I found my eye being drawn to the very back of the wood: here lurked the Alpha Tree. The Boss. Big Daddy Tree. Queen of the Forest. The One Tree to Rule Them All. 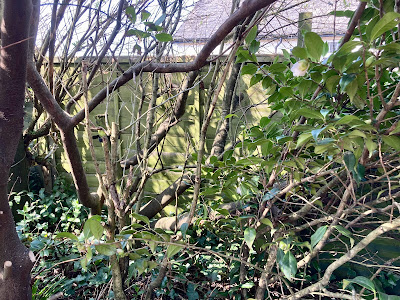 Honestly, I'm only putting the picture up because it seems weirder not to... but it was difficult enough to spot in three dimensions; two dimensions are entirely anti-climactic. The Alpha Tree is the darker branches, just in front of the fence and growing around another, weaker tree... I think the latter is still alive, but it's a little hard to tell if it's growing new leaves or not. It's not exactly a beta tree. More like mu or nu in the rankings...

At the far left of the picture, you can see the trunk of the Bay Tree, with a branch of the Alpha Tree  going steeply up towards it. The Alpha's branch enters the foliage of the Bay and rises up until it pokes out the top like a puppetmaster who's unafraid to reveal the strings. Lower down that puppetmaster branch, you can see a secondary branch split off, heading towards the top right of the picture. This one carries on for a good two or three meters, hanging watchfully over the path where we tread unawares.

I had no intention of tackling that mess head on, and I certainly didn't want to go through the Bay Tree. The easiest path was to go around the overgrown holly into the Briars' territory, head along the back fence (which is not getting replaced, thankfully), and work into the wood from the corner. After many battles year, I am no longer intimidated by the Briars.

I had previously sheared off one side of the holly to get access to the back. Behind it was the cluster of palm-type trees tall enough to be seen over the mass, and (once I brushed aside some dead grass) a large landscaping rock. I've spotted quite a few rocks scattered through the Wild Wood, which makes me all the more intrigued as to what the original layout was. 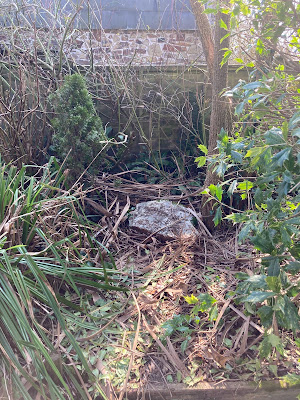 Overhead, I found a rosebriar making a straight line for the side fence, and I used that as my guide (ungratefully cutting it into pieces as I went along.) I had more holly to cut back (this holly is not having a good year, but it honestly needed to lose weight anyway...), along with some leggy shoots of buddleia. Also known as the butterfly bush, buddleia is one of the more desirable weeds in any garden, but it's definitely a weed which puts out vigorous new growth every spring with or without pruning. I had very few nerves about hacking away at it now.

Along my path I found plants I never knew were in my garden: Stinging nettles (they have obvious drawbacks, but peacock butterflies depend on them, so I'm happy to allow them here); some sort of creeper that was out-competing the ivy, to which I can only say: "Respect." (With judicious apprehension); more prettily, periwinkle, which is an invasive pain, but I have a soft spot for that spring touch of purple. 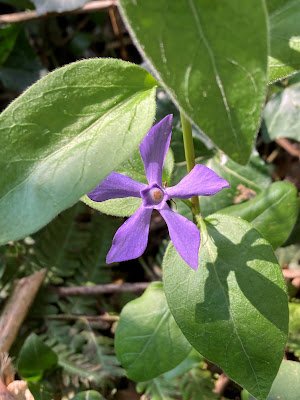 Eventually, my way was blocked by some far sturdier branches of buddleia, which had transcended from shrub to tree with a vengeance. Finally, I realised that I wasn't just dealing with the Briars and the Wild Wood; the Buddleias are a faction unto themselves. Hulked-out branches spread massively over the holly and into the Wood. It was these branches that had caused the Alpha Tree to grow over its own subjects. 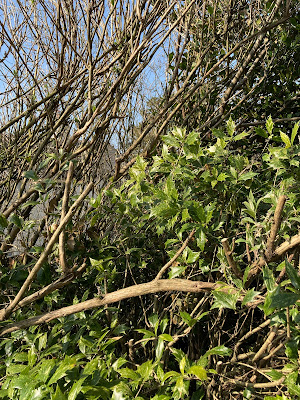 I've never before appreciated just how insane buddleias run wild can get. This havoc was wrought by just one plant, though there were two or three all tangled together in the corner. As I attempted to unravel the knot of them with my eyes, I suddenly noticed something else: they had a hostage. 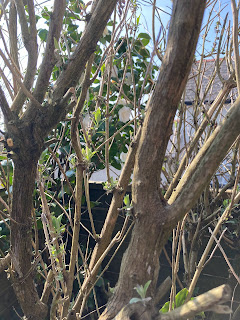 Once I'd spotted it, I couldn't understand how I hadn't seen it before; behind the bare branches were the evergreen leaves and white blossom of a fourth camellia. The buddleia had caged it against the very corner of the fence, forcing it to grow erect but slender in its prison. At least it could face southwest, making it the only thing in the wood that was not competing for the sunlight. Despite its diminutive spread, it was blooming prolifically.

It is clearly visible from the road, so I have no idea how I never noticed it before. Of course, it would be a lot less obvious until the past week or so when it started blooming. The flowers gazing over the fence inspire the cliche analogy of a fairy tale princess in her tower.

As you may have noticed, I embarked on this gardening challenge with a determination to find adventure. I'm not passing up a sidequest when it presents itself; we are Rescuing that Princess.

Sarah
Still recovering from a forced mid-life reboot: Single Mum with two kids, one cat and a garden.