Yesterday, my six year old daughter started talking to me about Rosa Parks. I'm not sure if this was something that had come up at school or if she had been reading the picture book we have about Rosa Parks, but she embarked on this conversation about how unfair it was to black people to be treated like that and how she would be like Rosa Parks and not give up her seat. And I went along with it, making agreeing noises and throwing in comments about being aware of injustices and standing up for those who need help... all very standard and a little trite.

And then my daughter said: "I'm glad I'm not black."

As always when the children go off my parenting script, I rambled helplessly for a few minutes trying to tag off the key politically correct points. I talked about white privilege and how it was good to recognise that we had advantages because we're white but that doesn't make it bad to be black. I talked in very vague terms about how black people have a lot to be proud of, but of course I couldn't give any examples because I am a well-intentioned but ultimately insular white person who doesn't think well on her feet.

I remember what I talked about, but—crucially—I dont remember what I said, and I'm not convinced that my daughter understood any of it. I need to prepare, find a time to bring this topic up again and talk through it a bit with both children. In the meantime, it's another reminder of just how ineffectual we actually are when it comes to supporting equal rights.

PS In another fantastically uncomfortable parenting moment, my daughter started reading this blog over my shoulder as I typed, so we got to revisit this topic sooner than I expected. For the record, she's OK with me publishing the blog. I'm still not sure she understands what I mean about white privilege, but I'm a little happier about how I said it this time.

This was the motivation behind an impulse trip to Los Angeles this week. It was a chance to get together with a few online friends, which didn't really justify spending so many frequent flyer miles and hours of travelling for a day and a half. I've never even liked LA that much. But we've had a few trips this year that didn't pan out for one reason or another, so I wasn't passing up this opportunity. I was just going to have to find things I did like about LA.

I've always been a beach-lover, and the Pacific Coast is far more reminiscent of the British one than Virginia's shores. (Much of my growing up was done in Cornwall with its miles of clifftop paths.) Walking is my favourite form of tourism and exercise, but my less enthusiastic children usually limit me to three or four miles. Freed from any sort of consideration for others, I planned an itinerary based around the coast. For Thursday morning, I wanted to explore a bit of the Palos Verdes peninsula: stony beaches and sandy cliffs.

My vague plan was to get to the shipwreck, the SS Dominator, but as I was going at high tide, I knew I might not be able to reach it. I also knew that I didn't have suitable shoes—the internet was recommending sturdy hiking boots with ankle support, while I was packing sandals and thin-soled Vibrams. The shoes ended up being the problem rather than the tide. My pace was so slow that I didn't get anywhere near the shipwreck before I ran out of time. While I had planned a roughly seven mile round trip, I probably only covered about three miles after all.

It was still worth it.

I started at Roessler Point with a detour: following the canyon trail down to pretty Malaga Cove where I watched paddle boarders gathering to make the most of a calm day.

Then I headed back to the road, following it south and west and up as the cliffs rose higher.

At Flat Rock Point, there was an easy, gradual path down to the beach on the map. There was also an unmarked trail that appeared to lead straight down the point to the rocks themselves. Somebody had secured a rope at the top to assist travelers—I wasn't sure if I should find that reassuring or alarming. However, this looked far more fun than the well-traveled path, so down I went.

Fortunately, the rope was secure, and the ground was mostly so. The trail itself stayed intact, but it was covered with loose sand and gravel, so with every step, I slid several inches. I should probably have changed from sandals to Vibrams before heading down it, but even with my grossly unsuitable footwear, I was able to get down with little difficulty. Still, I resolved to be a bit more responsible when choosing my path back up. Famous last words.

The tide was too high to get to the rocks the point was named after (I don't know if it's even possible at low tide), so I changed from grossly to mildly unsuitable footwear and set out along the beach only to find myself stranded at a little headland. As calm as the sea was, I didn't feel comfortable wading across slippery and shifting rocks to get around it, so it seemed my choices were to wait for the tide to recede or to go back the way I came.

Too impatient for either, I studied the headland and decided I could probably climb it. It was maybe fifteen or twenty feet high, and the rocks were dry, 'grippy' and steep rather than vertical (or over-hanging). Plus, if something went terribly wrong, there was a guy at the top who would presumably contact the emergency services on my behalf.

The only thing to go wrong was a scraped leg, but there were a few points where I was reminded that I don't actually have the confidence for free-climbing and a few more where I was grateful that I do have small feet. I was also grateful to the guy at the top for passing no comment on this crazy woman who was scaling cliffs rather than coming down the nice, easy trail he had used.

At least I was able to follow the easy trail down to the beach on the other side of the headland and continue my trek.

I quickly realised that I did not have the pace to meet my goals. The stones would shift beneath my weight, so I was meandering lightly rather than striding with confidence (shoutout to the hardcore Californian who went blasting past me in flip-flops), and I had to watch my feet constantly. Periodically, I would remind myself to stop and actually look around at what I had come to see.

Nevertheless for two hours, I had the sound of surf in my ears, a stunning view whenever I wanted to look, and while I might not have found a shipwreck, there are always discoveries to be made along a beach. 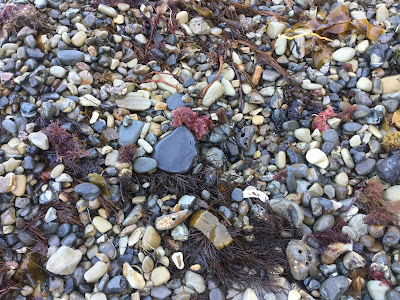 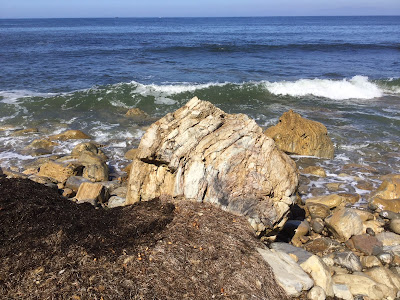 Somewhere ahead, I knew there was a cliff path that ran down a drainpipe, and I had hoped to at least make it that far, but as it drew late in the morning, I consulted Google maps and found a closer route back to the cliff to finish out my hike. I felt grateful to modern technology until I started up this alternative trail and realised that Google has a very generous definition of 'footpath'.
More loose sand and gravel, more searching for handholds... this was a harder trail than the one at Flat Rock Point, and now I had no rope to help me. I made it up, but I would not recommend this as a trail to go down. I'm also sure no Everest climber was more relieved to reach the summit than I. (OK. I'm not at all sure of that. But I had very strong feelings for that stretch of scrubby but level ground at the top.)

I was at the side of Nowhere Road by this point, but modern technology really did come through. All hail online taxi services! In ten minutes, I had a ride back down to sea level and onward to my hotel.

The way it turned out, it was just as well I had done it alone: I didn't have to worry about my slow pace holding anybody up, I'm sure any travelling companion would have thwarted my first attempt to leave the trail, and were the kids with me, I wouldn't have risked those climbs. Yet for all I'm an introvert who likes her solitude, I'm not really a solo adventurer. I missed having somebody to share the experience with. (This is probably why I'm committing it to blog.)

I won't pass up a similar opportunity, even if I do have to fly solo, but the next few adventures will be with the family. I just need to remember to—every now and then—push for what I want over what they want.
Posted by Sarah at 20:14 No comments: Links to this post