Today marks six months since I learned the end of my marriage was nigh.

Things are... better. With me, at least. And mostly with my life... a lot that needs improvement, but plenty of time to work on that, and the important thing is that I'm feeling like I can handle it. Somewhere along the road trip way, I got my confidence back and my sense of control. It's all perception, really, as nothing fundamental has changed, but I'm suddenly able to think through many potential scenarios that previously devastated me and come up with plans to tackle them should they arise.

And obviously, there are going to be a lot of ups and downs still. Let's be honest, I had a minor panic attack last week, and I'm still hypersensitive about getting things right in the whole co-parenting side of things, but the whole concept of divorce and moving back to the UK is no longer so overwhelming.

I wouldn't say that I've accepted it yet. Divorce is a tough pill to swallow. I am, however, finding myself able to take steps to normalise it.

I hadn't taken my wedding rings off... I had looked at them often, thinking they were an example of denial, but I've worn those rings for thirteen years, and I like them. They were part of me, a symbol of my family, not just my marriage. Besides, though I'm technically single, it's not like I am "available"—I can't offer anybody a healthy relationship right now.

Ultimately, I decided that if I wasn't ready to take them off, then I didn't need to. That was one part of this whole process I did have control over.

I vaguely thought I'd take them off once the divorce came through, but on Thursday I found myself thinking it was time. That feeling was with me all day, so in the evening I did it. They're on my dressing table for now. I often look at them or at my empty finger, but it's felt right. I'm still not interested in finding a new relationship, but I feel single—or confident in that identity—now in a way I didn't before.

The inscription inside my wedding band reads "No joy without you." (In a rather awful piece of foreshadowing, we didn't have time to engrave my husband's before the wedding and never got around to doing it afterwards.) I remain adamant that I regret nothing about getting married, but I will have to prove those words a lie. 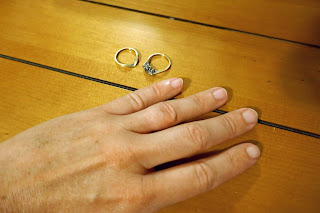 The day after I took the rings off, I changed back to my maiden name on Facebook, so I can start to reclaim that identity. Baby steps. If I do enough of them, I might start actually believing this divorce is going to happen. (Don't ask me what I currently believe is going to happen. We're just going to stay in limbo forever! The kids won't grow up, and the cats will never die, and it'll be fine!)

My daughter spotted the rings on my dressing table the morning after I took them off, and immediately tried to put them on herself... I had to stop her. I didn't need to wear them any more, but I did need to keep them. She seemed very surprised I'd done it but not upset, which was a relief. She then forgot about it for a few days before telling her brother yesterday. He was shocked but, again, not obviously unhappy.

I asked them if I should take one of our pictures down: the one from our tenth anniversary which is on the wall underneath their school pictures. They said "No," so it's still up. It feels a little weird and inappropriate for me to display it, but this is the children's house too. To them, it's a picture of their parents. If not before, we can put it somewhere less public than the front room when we move house.

They're both being supportive in their own way. My daughter tried to match-make me the other day, literally telling a friend (in his twenties and engaged) that I could be his girlfriend. Apparently, while I wasn't around, she also asked a couple of my other friends to be nice to me—which I believe is a reflection of her father's exhortations to behave for Mummy. It's incredibly touching. She and I have butted heads a lot this year, thanks to my current irritability, and it's a good reminder of how much she actually cares for me.

My son is less demonstrative, but also more laid back about it all. I worry that he's bottling things up, but every now and then he'll say something that lets me know he's processing things. Now that I can keep things more matter of fact, I do try and talk about my emotions to the kids and discuss the various steps we're taking to work through this period of our lives. I always want to be as open as is appropriate with them, let that conversation be out there in the hopes that they will feel readier to bring up their own concerns—if nothing else, I don't want them to feel left in the dark about what is going on in their own lives.

The road trip probably did help us feel more bonded in our smaller family unit. The absence of Daddy was sorely felt, and we found ourselves taking turns to fill in for him in old family in-jokes. But otherwise, it was gratifying to prove to ourselves we could and would still live our lives. One of my fondest memories is us in the car, singing along to American Authors, What We Live For, as I drove:

Starting next week, they'll get the other side of split-family-bonding when I go to England for two weeks of Montessori workshops and their father takes over as the resident adult. Hopefully, we can continue to build security for them.

And self-confidence for me. For years I've had issues with self-esteem and feeling that I wasn't pulling my weight in our marriage, but ironically, the end of the marriage banished rather than confirmed these. Their father is still our sole source of income and I'm still a stay-at-home Mum, but over the past six months, I've been responsible for managing the house and the kids (and my studying), and, well... we're all still standing. Nothing's burned down.

It's not all been graceful, but it's a little like when you have your first pet or baby at home for a week: you're so incredibly impressed with yourself for keeping this dependent creature alive. That's how I feel now. I did this. Advanced level adulting. Go me!
Posted by Sarah at 15:54