From Philadelphia, we were heading towards northwest New York state, but we broke the journey a couple of hours out of town for a little place I'd found when googling waterfalls: Seven Tubs Recreation Area. 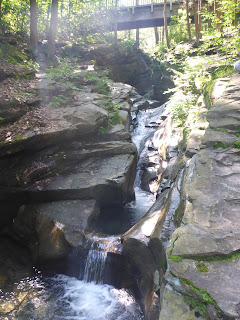 This was tough to get to, as I'm not sure if you're supposed to turn left down the road (Google thought not, and the road markings were self-contradictory), and it's virtually impossible to see before you pass it if you're turning right. I drove past it and U-turned twice, before I gave up and drove down the left lane during a break in the oncoming traffic to make the turn. But it's free parking, and the waterfalls are about one minute's hike from the parking lot—we could hear falling water and children squealing as soon as we got out.

The fun of this site is the hands-on exploration of the waterfalls. We didn't try scrambling through the tubs, since it looked too slippery to do without falling and getting thrown down by the water—but you'd be bruised rather than broken, and the water levels weren't high/fast enough when we were there that I'd have been particularly concerned about drowning. However, there's a trail that fords the stream at a wide pool, great for wading and we could scramble about the rocks there and play with the falls at either end. (My daughter even managed to make a water slide out of one slope, though her older brother couldn't do it without grinding to a halt.)

There's a short trail around the area, but we just played where we were. A group of people had set up a folding table and small grill and were having a party right there in the pool. This made it a little more crowded than perhaps we would have liked, but the idea was such genius that I couldn't resent them for it. The water was crystal clear, and we saw a big turtle (possibly a snapping turtle?) at the deep end, wedging himself into the rocks. We named him Grumpy McWhyareallthesepeoplehereface.


We stayed about an hour, then headed out for lunch. In retrospect, I should have stopped beforehand and picked up a picnic.

After that, it was a smooth drive north to some old friends who moved to NY from VA, and who we hadn't seen for four or five years. We spent the rest of the afternoon in their pool, followed by the local 4th July fireworks display... We were glad to get the chance to celebrate a day early, as we were headed to Canada the next morning.
Posted by Sarah at 21:42